The Giuseppe Meazza stadium, also known as the San Siro stadium or simply San Siro from the neighborhood in which it is located, is a football facility in Milan. Owned by the Municipality of Milan it is nicknamed the Scala of football or the temple of football, it is one of the most internationally known stadiums. It was included in second place in the ranking of the most beautiful stadiums in the world prepared by the prestigious British newspaper The Times in 2009 and represents one of the greatest symbols of the city of Milan.

The San Siro Stadium with its 75,923 seats is today the most capacious in Italy. The structure, characterized by high standards of comfort and safety, is part of UEFA’s Category 4.

Four corner towers and seven intermediate towers support prestressed reinforced concrete box beams which in turn support the tiers. The four corner towers stand out beyond the stands reaching the level of coverage. The stadium consists of 3 rings made in different times and modes:

in 1926 the stadium was built with the 4 rectilinear stands (first ring)
the Municipality of Milan, after having purchased the stadium, started in 1935 a first expansion operation which gave rise to the construction of four connection curves between the stands
in 1955 a supporting structure was built for a second ring of tribunes above and partly covering the old stands. The architectural image of the stadium is modernized by the helical ramps that allow access to the second ring
on the occasion of the 1990 World Cup, the Municipality of Milan decides to begin a profound renewal of the stadium. One opts for the design of an architecturally surprising solution, through the construction of a third ring and the coverage of all 85,700 seats
In the framework of the verifications for the suitability of the structures, Akron has carried out a wide series of checks on structures and materials:

The considerable size of the work made it necessary to have a widespread control of the state of the materials on all the elements of the stadium (3 rings and cover).

A particular complexity was constituted by the static load tests of the stands of the second ring which made it necessary to create temporary structures for loading with over 60,000 liters of water through flexible tanks positioned on the stands. The measurement of lowering with over 50 electric displacement transducers has allowed the conducting of tests in maximum safety, verifying in real time the displacements according to the applied load. 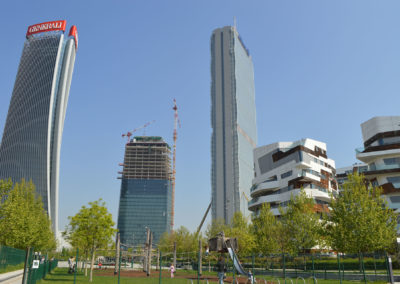 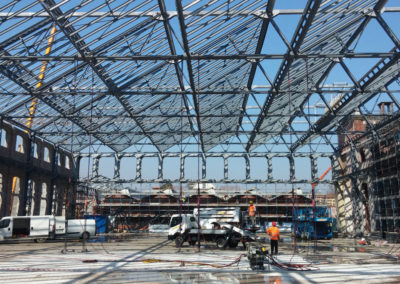 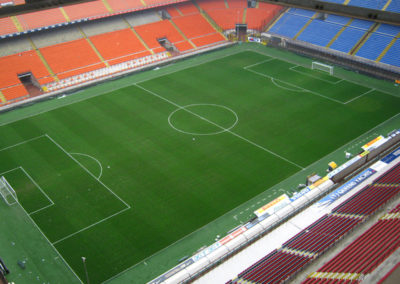