Akron has carried out the static and dynamic testing of the bridges on the South and North roundabouts in the municipality of Reggio Emilia: Lot 32, IV61, overhead axle equipped with the AV / AC Milan-Bologna section.

The bridges were built by Rodano Consortile Scarl (Cimolai SpA metalwork) based on a project by Arch. Santiago Calatrava Valls.The two bridges are an integral part of a single architectural project that includes the new railway station and the new motorway exit. The bridges rise along the Reggio-Bagnolo equipped axis on roundabout junctions and are located to the north and south of the central bridge over the A1 motorway.

The structures are of the arch type with deck suspended by cables. The arc is placed transversely to the direction of travel of the cars, has a height of 69 m and is connected to the main beam of the deck through a double alignment of cables with hyperbolic trend. The arch and the deck are made of steel and rest on concrete shoulders. Both bridges have a length of 179 m (two spans of light 89.5 m) and a width of 15 m.

The testing of the work involved the static loading of the structure in three different test conditions and the dynamic pre and post load characterization (first five modal forms). The complexity of the testing tests is linked, in this case, to three fundamental aspects:

The dynamic analysis of the structures allowed the evaluation of the dynamic characteristics (modal frequencies, accelerations, dynamic deformations, etc.) with the following objectives:

The kinematic measurements were performed by instrumenting the two structures with seismic accelerometers of the ICP type. For each bridge, 24 measurement points have been identified: 16 places along the deck and 8 on the arch.

The acceptance tests included the determination of the pulling force acting on the cables by dynamic characterization (vibrating string theory – D’Alembert equation). The comparison of the values ​​calculated with modal analysis with the values ​​measured with hydraulic jacks guaranteed the reliability of the method. 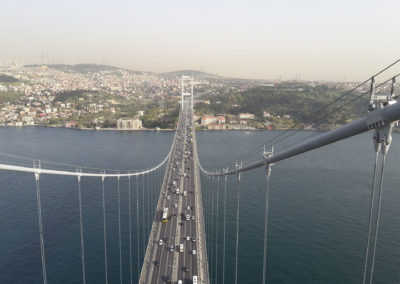 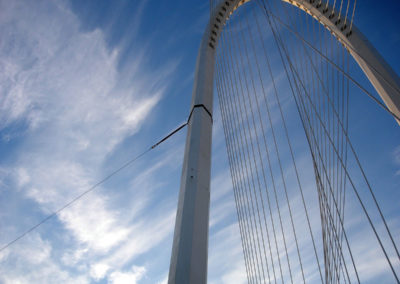